Cutaways and insert shots are two film editing techniques that are used to connect scenes, provide context, and/or to add visual interest to a video. For example, an interview featuring a person talking for several minutes can be pretty boring. One or more cutaways, however, can be used to show what the interviewee is talking about, adding visual interest to the film. A cutaway might feature a plant, animal, landscape, map, animation, instrument or some other object or process being described during the interview.

Insert shots are also used to provide context in a video, often showing some additional detail in a scene. For example, a medium shot might show a scientist working in the laboratory and pipetting a liquid into vials. An insert shot showing a closeup of the scientist’s hands or the pipette tip would be filmed separately and inserted into the main footage. Such edits can enhance a video by providing a new perspective or additional detail not apparent in the main footage.

The scientist videographer must plan ahead for cutaways and insert shots by filming “b-roll” footage along with the main footage. Such preparation may take a bit more time during filming and some effort during editing but is well worth it in the end.

In the following tutorial, I describe these two techniques and show how to use them in iMovie to edit video footage.

One of the biggest barriers for scientists to use video as a communication tool is the perception that video making is time consuming, expensive, and technically challenging. I know that this idea is out there not only because of comments from colleagues, but because this was my impression before I got involved in making videos. What I eventually learned was that advances in communication technology have made it possible for anyone to make a video—with inexpensive equipment and a minimum of time and effort. We now have (1) devices and software that make it ridiculously easy to create an effective and powerful video message and (2) the Internet where we can instantly share our knowledge globally.

To address this particular barrier, I’ve created a new tutorial that is designed to show the science professional just how easy it is now to create a video to share science. My goal with this brief tutorial was to demystify the video-making process for colleagues and students unfamiliar with it and to show how easy it is to plan, film, and edit a video with a smartphone (iPhone). I’ve emphasized the use of smartphones in this particular tutorial because: (1) most people already have one and know how to use it, (2) they have excellent cameras that can produce high definition video, (3) there are excellent movie-editing apps for mobile devices, (4) both the camera and editing software can be readily mastered with minimal training and effort, (5) their Internet accessibility facilitates sharing the video with others, and (6) filming, editing, and sharing a video is accomplished with a single device. Although other types of recording devices and more sophisticated editing software are available, they require somewhat more time and effort to master.

Here’s that tutorial (click here for a direct link):

This question is the one I get most often from science professionals attending my workshops and seminars. Everyone is busy. I get it. You get it. People want to know how much of their valuable time is going to be diverted toward an activity that is not going to contribute to their h-index.

So I’m going to try to answer that question in this blog post.

The most honest answer is: it depends. People vary wildly in their abilities to craft a compelling story, to visualize how to tell it, and to operate the recording equipment and editing software. The actual amount of time you will spend will depend on your skill level at using the equipment and software required for making a video. If you’ve never used movie editing software, then it’s going to take you longer to edit your clips compared to someone who’s played around with iMovie, for example. The same goes for designing and filming.

Consequently, I’m going to give some ballpark estimates based on a relatively inexperienced person–someone who typically takes a video-making workshop.

In my workshops, I’ve found that people can generally design their video (overall story and how to tell it) in an hour or so, especially if they are given a template to follow. Filming can take a couple of hours or days, depending on your topic, length of the planned video, and where you need to film. Workshop participants, working in pairs and using smartphones or tablets, were able to film the main segments of their 3-minute video in two to three hours. Another hour might be spent shooting B-roll or searching the Internet for video clips, animations, photographs, maps, and illustrations to augment the filmed segments. After a brief tutorial, editing might take another couple of hours.

Based on these estimates, the total time required to produce a rough cut is six to seven hours. Another couple of hours will likely be needed to polish or reshoot problematic clips. In other words, plan on spending (at a minimum) the equivalent of an entire day making your video.

As you gain experience, though, you will find that you can use your phone to shoot and edit a video on the fly. For example, when you are conducting fieldwork, it’s easy to shoot brief clips that are immediately imported into an editing program such as iMovie. While waiting for your electrodes to equilibrate or for sample bottles to incubate, you can do some trimming and editing of those clips. I can take this approach while on a field trip and have one or more videos ready to upload by the end of the day. See this example that I filmed with my iPhone:

Before I went to the site, I spent some time searching the Internet for information about the mangroves growing in the region. Armed with that information, I began planning the video (in my head) during the drive to where this mangrove stand was located on Yakushima. I spent around two hours at the site filming various aspects of the mangrove stand and jotting down notes about some of the plant characteristics I observed. I started editing this video on my phone with the iMovie app for iOS while I was on site and could retake any clips that needed improvement (I had to reshoot the segment in which I spoke several times).

As the story began to crystalize, I walked around shooting B-roll to illustrate important points to be made. By the time I was ready to leave, I had a rough cut of the video finished and ready to polish. After returning to my hotel room, I added voice-over to the video and also some images of maps and other items that I had to download or modify using my computer. Making this video was fun and informative and made the excursion to see this unique stand more memorable.

How long does it take to make a video? For me, the answer doesn’t really matter. What’s important is that I’ve made a video and, in the process, learned something new.

Since I’ve made free copies of my book, The Scientist Videographer, available at Smashwords, I’ve decided to also offer free copies of the original (interactive) version of my book, (readable on iPad, iPhone, & Mac) in exchange for a review.

Here’s how to get yours: email me at thescientistvideographer@gmail.com and indicate that you would like to review my book in the iTunes Store. I will then send you the promo code, and you will be able to download the book for free. There is a limited number of these promos, and they are going fast.

Don’t have an Apple device? Consider using this offer to gift my book to a colleague or student who has an iPad, iPhone, or Mac and who has expressed an interest in making videos.

Why am I giving my book away for free?

Well, mainly because I’m not looking to make money with it. My primary motivation in publishing the book was to encourage and promote better communication of science by science professionals. All of the information and tutorials (now numbering more than 100) I’ve created since 2012 are available for free. I wanted to make that information available in a more organized and focused way, so I pulled it together in this book.

I self-published The Scientist Videographer via iBooks Author (which, by the way, is an awesome authoring platform). I’ve depended on word of mouth and social media to get the word out. Book reviews also are really important to encourage people to read my book and to try using video as a communication tool.

If you are one of the many visitors to this blog (about 400 per day) who have benefitted from the information and free tutorials you found here or on my YouTube channel, please help me spread the word by writing a review and telling your colleagues and friends about my offer.

In addition to Apple’s iBooks and Amazon’s Kindle, I’ve just published a copy of The Scientist Videographer at Smashwords. At the latter, you have the option to download the book as an ePub, pdf, Mobi, or txt file or to read it online.

For a limited time, I’m offering copies of the book at Smashwords free to anyone who agrees to review the book at any of the above distributors. All you have to do is send me a note that you agree (thescientistvideographer@gmail.com), and I will give you a promotional code to use when you check out. Already have a copy of my book? Consider writing a review and use the promotional code to give the book as a gift to a friend or colleague. This offer ends April 21, 2016. 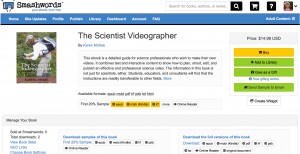