I previously created a how-to video explaining what graphical abstracts are and provided some examples, which can be seen here. In this video update, I cover three characteristics that will make your graphical abstract more effective and offer another example of how to craft one in PowerPoint.

Educators are scrambling to deal with the Coronavirus pandemic. Many have been instructed to work from home and to convert face-to-face classes to remote instruction. They are trying to record lectures and PowerPoint slides, but are struggling with the videography and related technology. In an effort to help, I’m listing below a series of video tutorials that might be useful.

Some scientific journals are asking authors to prepare a graphical abstract to be submitted along with the manuscript. Graphical abstracts can help attract readers to your papers. In my opinion, it is worth the time and effort to craft them. In this video tutorial, I talk about the benefits of graphical abstracts to the author and briefly show how to prepare one. This and other writing tutorials are posted on my other YouTube channel.

I recently launched a new YouTube channel focused on scientific writing. Although I’ve written several essays about writing (How I Wrote My Best Scientific Paper, How to Write a Scientific Abstract), I knew that a lot of people dislike reading long articles. More and more people, especially students, like to get their information by watching brief videos. So, I decided to begin sharing what I’ve learned about writing over a forty-year career in a series of videos.

I’ve been making video tutorials about science videography for six years now. So, using video to share insights about writing was a no brainer. The only question was: What video format would work best for this particular topic? I decided to try something simple and that would make it easy to cover a lot of material on camera.

I used my computer camera and an external microphone to record these videos. I had my script or list of main points on my computer screen where I could easily see them. The trick is to deliver the material in a natural speaking voice and avoid the shifty-eye syndrome. That’s easier said than done. But I thought I would try it for a while and then in a future post offer some insights into what works and what doesn’t.

Here are a couple of the writing videos I’ve posted:

Many people get their impressions of scienti 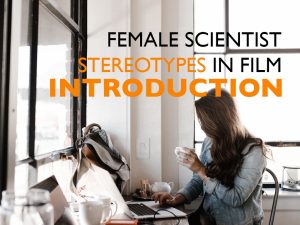 sts and what scientists do from the movies. Film can depict the realities of careers in science and technology while telling a story about the characters who happen to be scientists. Film is also important in developing and perpetuating society’s myths about scientists. We are all familiar with the cliché of the mad (typically male) scientist in fictional film. But what about female scientists? In a new video series, I explore six stereotypes of female scientists seen in the cinema.

All of these videos are posted on my YouTube channel. I used examples from the movies to illustrate each stereotype, but as you’ll see, I did not use clips from the original movies, but instead created the videos using images in the public domain (or otherwise free to use). I took this approach for several reasons: to avoid any copyright infringement claims, to challenge myself to create videos using only still images and voiceovers, and to aid the viewer in envisioning these stereotypes beyond the specific movie examples I offered.

The following list provides links to the series of videos describing the six stereotypes:

Female Scientist Stereotypes in Film: The Daughter or Assistant

If you wish to learn how to create a video using still images (montage), here is a tutorial showing how in the movie-editing app, iMovie: