Many successful videographers carefully plan their projects before filming. Writing a script can help you organize your video prior to filming, avoid time-wasting digressions, and select appropriate language for this medium. In a new video tutorial, I discuss the difference between writing text meant to be read and that meant to be spoken and provide a series of suggestions for preparing a script for a video.

By the way, many of the tips I cover in this tutorial apply to preparation of material for podcasts and oral presentations at conferences.

Another nice video by the American Chemical Society focuses on what’s behind the diversity of colors in birds. It illustrates how to make an eye-catching video that gives the viewer something beautiful to look at while explaining the science behind the dramatic images: 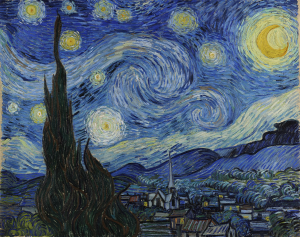 “If you hear a voice within you say, ‘You cannot paint,’ then by all means paint, and that voice will be silenced” – Vincent Van Gogh

That quote by Van Gogh is about our internal censor—the voice that erodes our confidence and prevents us from trying something new or challenging. Whenever I talk to a group of students or colleagues about making videos about their scientific research, someone invariably responds by saying that they aren’t very artistic and thus cannot be very good at videography. So, why even try?

I understand why they might think this way. Many people are reluctant to engage in any activity that presupposes creativity or artistic ability. Musicians and artists are believed to be somehow different—that they possess inherent talents the average person lacks.

However, as children, we all happily and unselfconsciously draw vivid pictures and make up imaginative stories. Then something happens. A teacher or parent says something discouraging, or our peers make fun of us. Or, as we grow older, other activities draw our attention, and that artistic spark fails to evolve.

I was lucky in that I continued to draw and sketch through childhood. I was an aspiring scientist and spent a lot of time drawing plants, insects, and protozoa that I could see with my microscope. I knew that such detailed drawings were important records for a biologist or ecologist to create. Even after digital devices came on the scene, I continued to sketch in my field notebooks and in the personal journals I kept. My ability to capture an image using only pencil and paper matured. Each drawing was better than the last one. I even became good enough to work as a free-lance scientific illustrator for a while.

My point is that any skill, whether artistic or not, improves over time with practice. With videography, your first attempts will likely not be great, perhaps even terrible. But it doesn’t matter because you will improve with each succeeding video you make. This point  is especially relevant for scientists and other professionals who want to use video as a communication tool. We’ll likely never be as good as a trained filmmaker, but we can still produce effective videos.

In fact, the scientist videographer’s goal is not to be a professional filmmaker but is instead to be a more effective science communicator. Scientists must still learn to communicate using traditional means such as writing articles for publication in journals and speaking at conferences. But we must also be able to use other media to communicate, such as video, which is now a popular way for people to get their information.

And by the way, there is no right way or wrong way to make a video. Worrying about making a technical error or being judged from a filmmaking standpoint is paralyzing. I always advise students who suffer from writer’s block to, “Just write and get your ideas down first; go back later and polish.” Most find that once they are freed from the fear of making a technical error or of not writing the perfect sentence, the words begin to flow.

That approach also works for videography. If you find yourself paralyzed with doubts, just start filming—yourself or others conducting field research or working in the laboratory. Film with the thought that you’ll not necessarily use all of the footage in your video. That view will likely free you to capture a variety of footage and give you some much-needed confidence about filming. I think you’ll find that once you’ve got some footage in hand, the creative juices will begin to flow.

So, if you are disappointed in your first attempts at videography (or are hesitant to even try), remember that even the best videographers were once novices. The difference is that they ignored their internal censor, which was gradually silenced as they made each succeeding video.

For more about this topic see: The Stages of Learning Videography (and Other Skills)

In my latest series of posts, I’ve been focusing on why scientists and other science professionals should be using video to share their experiences and to explain why their work matters to society. One reason is to combat the false information about science topics (the Earth is flat, NASA faked the moon landing, vaccines cause autism, etc.) and the anti-science movement, which questions the need for research and the motives of scientists. Such groups are technically savvy and understand the power of video to spread their message.

Now I’m not suggesting that you take on these anti-science folks.

Instead, you can make a video highlighting why your research is important and at the same time show your enthusiasm and dedication to finding solutions to problems. In other words, put a human face on the science. Videos featuring women and minorities are particularly needed to help inspire a more diverse scientific community. The following video accomplishes that objective by interviewing a South African scientist talking not only about what she researches but what attracted her to science in the first place.

Another video showing a large team of scientists on an expedition to collect deep ocean cores counters the outdated idea of the lone scientist working in an isolated laboratory. The video features scientists from different countries working together, day and night, to accomplish their research goals. In addition, the video shows the great care the scientists take in collecting, storing, and analyzing their core samples. Such videos give a more accurate picture of how and where scientists work and the diverse makeup of scientific teams.

In a previous post, I talked about how the public’s view of science and scientists is skewed toward the laboratory as a primary location where science takes place. I pointed out that for many scientists, their laboratory is a rainforest in Central America, a desert in the US Southwest, the bottom of the Pacific ocean, or a cave in Canada. Yet the layperson’s image is most often of a white-coated scientist working in a sterile laboratory (google “draw a scientist” and see what images you find).

To raise awareness by the public (especially prospective science students), more field scientists need to film where they do their research and post them on media-sharing sites. The video embedded below (Spelunking in Search of Antibiotics) is a good example. It is only two minutes long and required only a brief break during their field trip to film. Yet the message it sends is that scientists work in fascinating places and are often intrepid explorers seeking answers in the most remote corners of our planet.

Such a video is incredibly easy to film and edit with a smartphone. The following tutorial provides a few, basic tips (using an iPhone, but the tips are relevant for all smartphones):