In the video embedded below, I continue my conversation with Eric Brennan, a researcher with the USDA-Agricultural Research Service, who recently published a paper in Frontiers in Communication called “Why Should Scientists Be On YouTube? It’s All About Bamboo, Oil, and Ice Cream“.

That paper inspired us to join forces and initiate a video series to answer questions that science professionals may have about making videos. Each video focuses on a different question. In this one, we discuss who should make videos for scientists.

In case you missed it, here is the first video in the series: Why Should Scientists Use Video as a Communication Tool? 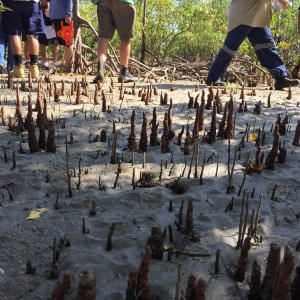 It was the third day of the conference, and we had just finished a walking tour of a local mangrove forest and shoreline at Ludmilla Bay, north of Darwin in the Northern Territory, Australia. Everyone was hot, thirsty, and sweaty as we filed into the air-conditioned auditorium at Charles Darwin University for the “Muddy Mangrove Movie-Fest”. We were about to be treated to a viewing of several videos made by researchers, conservation groups, and independent filmmakers–all focused on the topic of the conference–mangroves.

Earlier this month, I had traveled back to Australia to attend another meeting of the Australian Mangrove and Saltmarsh Network. The previous year I had been invited by the organizers to give one of the keynote talks. My presentation was titled “Communication Tools and Strategies for the 21st Century Scientist” in which I encouraged students and scientists to consider using the new media (blogs, video, social media, etc.) to share their work more widely within and beyond the scientific community.

Apparently, the attendees of the 2015 AMSN conference liked my message because they started planning a movie-fest for the next meeting that I was now attending in Darwin. The Muddy Mangrove Movie-Fest was opened by acknowledging me as the inspiration for it. I was thrilled to have been able to motivate others to go out and make videos about mangroves and mangrove research. Even better was to be present for the official screening of those videos at the 2016 AMSN conference. 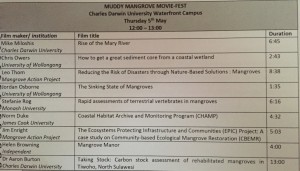 You can see the list of videos that were screened in the image at left. Not all of the Muddy Mangrove Movie-Fest videos are online, but some are. In fact, I had already seen and highlighted on this blog (Use Video to Share Your Dissertation) one of these videos (not knowing that it was to be featured at the Darwin conference).

I met the Ph.D. student, Mike Miloshis, featured in that video (Rise of the Mary River) at the Darwin conference earlier in the week. He came up and introduced himself and asked, “Aren’t you the Scientist Videographer?” I laughed and said that I certainly was. Then it hit me that I was talking to the student in the video I had critiqued on this blog.

As the lights dimmed and the first video began, I thought, “What a great idea–having a session at a science conference featuring videos created by attendees about their research.” Some of the videos were informative, some were inspirational, and some were funny. But the audience seemed to enjoy all of them. I know I did.

Here are the Muddy Mangrove Movie-Fest videos that are online (if anyone knows where the others are posted, please let me know):

Rise of the Mary River

Reducing the Risk of Disasters through Nature-Based Solutions: Mangroves

How to Get a Great Sediment Core

The Sinking State of Mangroves