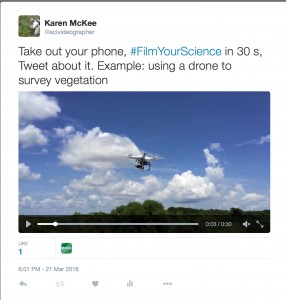 The idea is to encourage scientists to film some aspect of their research and share it through social media. Many scientists now have a smartphone that will shoot video. The incredible quality of phone cameras and ease of filming with them allow anyone to capture footage with minimal fuss. At the same time, some scientists and especially students are increasingly using Twitter to interact and share information.

I think that Twitter, which allows brief video clips (maximum length = 30 sec) along with a text message, is perfect for quickly sharing something you’re doing in the lab or an interesting observation you’ve made in the field. Using a hashtag (#FilmYourScience) helps identify tweets related to the topic.

I think such an effort has many benefits…for scientists as well as the scientific community.

Here are brief instructions how to go about recording a video on a smartphone for a Tweet:

You can also import a previously recorded video from your device’s media library. These can be trimmed to 30 seconds in Twitter. To stop the video from autoplaying in your Twitter timeline, go to Settings>Data>Video>Video autoplay and change the setting.

Finally, here is a video tutorial showing how to attach a video to a Tweet (direct link):