This is the first post in a series about Artificial Intelligence (AI) and how it might help scientists be better communicators. In this post, I introduce the topic. 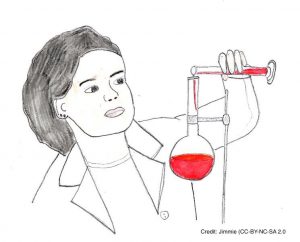 A scientist is working on a grant proposal and must create a three-minute video synopsis of what she plans to do with the funding and how her research will benefit society. This video synopsis is one of the required components of proposals submitted to government funding agencies. She logs onto a platform in the Cloud and uploads video clips showing her and her team working in the laboratory and talking on camera about the potential applications of the proposed research. An AI (Artificial Intelligence) system analyzes all of the uploaded information, as well as millions of images, animations, and video clips in the public domain. Within minutes, the AI system has identified the key components necessary to address the stated goals of the funding opportunity and has produced a draft video of the required length that is both intellectually and emotionally stimulating. The scientist takes the draft video file and makes a few edits based on her knowledge of the field and potential reviewers. She renders the final video and attaches it to her application package, which she submits to the funding agency. Her proposal is funded, and the funding agency uses her video synopsis on their website to inform the public about the research they are supporting and how it may affect them.

Far-fetched? Perhaps not. Recently, I was watching an episode of GPS in which Fareed Zakaria interviewed the CEO of IBM, Ginni Rometti, and my ears perked up when they talked about an AI helping a film editor cut a movie trailer, reducing the time required from weeks to a day. The movie studio, 20th Century Fox, recently collaborated with IBM Research and its computer Watson to produce the first computer-generated movie trailer for the science fiction film Morgan, which is about, appropriately enough, an artificially enhanced human.

Watson was trained to “understand” what movie trailers are and then to select key scenes from the full-length movie to create a trailer that would appeal to movie-goers. A similar approach could be applied to scientific information to produce a video proposal that resonates with peer reviewers and panelists, as in the hypothetical example above….or a video abstract to inform the scientific community about a recent journal article. The idea here is that a busy scientist may one day be able to use AI to rapidly scan a vast storehouse of data—much faster and more thoroughly than a human—and then to suggest the best material and design for an information product such as a video.

AI is being considered as a way to enhance many activities involving the analysis of large amounts of data—such as in the medical or legal fields. Using AI to create movie trailers or science videos may seem to be a trivial goal compared to making a more accurate medical diagnosis; however, when you consider how important it is for science professionals to be good communicators, the idea seems worthwhile. In the coming posts, I’ll explore this topic further and provide a bit more detail about how IBM’s Watson was used to create a movie trailer.

This post is part of a series about Artificial Intelligence (AI) and its potential role in science communication. In the next post (part 2), I’ll provide more information about Watson, the computer.