Just a quick post to remind readers that the Instafreebie book giveaway (20 Environmental Authors) I mentioned in the previous post is still going on. It will end on June 15, 2017. If you haven’t gotten my book yet, this is your chance to get a free copy of The Scientist Videographer. Although it’s not as interactive (or attractive) as the version I published in the iTunes Store (and made with iBooks Author), the Instafreebie text version contains hyperlinks to video tutorials and other online information.

“This book is great! I had absolutely no experience with video when I stumbled onto Karen McKee’s website, video tutorials, and this book. I learned everything I need to know to start making videos, and videos that I am proud to show others.”

“This book is laced with demo videos to help you understand and apply what you are learning. Most important to me was the step by step help in editing, both enhancing the science story and the technical skills needed to work with common editing software.”

“The Scientist Videographer is cutting edge, practical, and relevant–there’s much to learn.”

“The Scientist Videographer is an inspiration and deserves a spot with the best science communicators of our time.”

If you’ve enjoyed any of my free video tutorials or blog posts about making science videos, please consider contributing to this effort by purchasing my book ($14.99) or recommending it to a colleague, student, or friend.

I embarked on an effort to help colleagues and students use video as a communication tool on May 21, 2012, just over five years ago. During that time, I’ve learned a lot, especially about what can deter science professionals from trying a new means of communicating their science.

One of the most frequent comments I have gotten from colleagues is that they don’t really see the need for them to spend time 1) learning non-traditional ways to communicate (social media, blogs, videos) or 2) engaging the public. While such comments did not surprise me (I had once thought the same thing), I recognized the potential consequences of this attitude. Among other things, I understood that scientists needed to be familiar to and trusted by the general public, but that our traditional behaviors were sometimes interpreted to be arrogant, uncaring, or self-serving.

In my early talks on science communication, I often included a prophetic quote from a British report on science communication: “In modern democratic conditions, science, like any other player in the public arena ignores public attitudes and values at its peril” (Anon. Science and Society Report, House of Lords, 2000). As we’ve all seen in recent months, the scientific community in the U.S. has received a rude wake-up call to the fact that the science enterprise is under attack and that one reason is the failure on the part of science practitioners to effectively communicate why science is important to society. As a consequence, some science professionals are rethinking their past practice of staying sequestered in their ivory towers and avoiding contact with the people who fund their research (i.e., taxpayers). The most dramatic manifestation of this shift was the March for Science, held in Washington, D.C. April 22, 2017 and in various other locations around the world.

Granted, there are lots of pitfalls in putting yourself and your science on public display, especially without the training to do it properly. But I think we’re seeing that staying disengaged from the public is perhaps even more dangerous. We are in a critical transition period—from a time when only a select few scientists communicated with the public to a situation in which anyone with a cell phone and an Internet connection can reach millions of viewers with their science message. At the same time, antiscience groups are on the rise and taking advantage of advances in communication technology. My impression is that those who are attacking science and “facts” are far more skilled at crafting and delivering their messages than those of us in science. And they appear to be far better organized and dedicated to communicating their message than we are. This dichotomy should be disturbing to all science professionals.

Those of us in science are still learning how (and whether) to make use of new means of communication; not surprisingly, there can be mistakes and failures during this learning phase. However, with proper training and preparation, the next generation of science professionals will be better positioned to navigate this new communication landscape. Better training, combined with a new impetus for scientists to engage in non-traditional means of communicating their science, will help to overcome the barriers described above.

When I started this blog, there was some help for scientists interested in learning new communication approaches, but not a lot focused on teaching science professionals how to use video to share their work. In this blog and on my YouTube channel, I’ve aimed my tips and tutorials at the working science professional who doesn’t have the resources to hire a media specialist or the technical skills and training to make their own videos (as opposed to professional science communicators who have formal training in crafting science messages and in the use of audiovisual media to convey those messages). My goal has been to help others avoid mistakes and waste time in preparing science videos.

In celebration of my blog’s anniversary (and reward for reading to the end of this post), I’ve made my book, The Scientist Videographer (text version) available for free at InstaFreebie. It’s part of a 20-author giveaway–check it out! 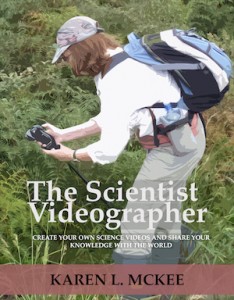