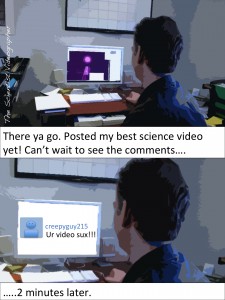 During the question and answer period after a recent seminar I gave on “Communication Tools and Strategies for the 21st Century Scientist”, someone asked me about whether I thought there was a downside to scientists communicating their work through video, social media and other online activities. I was not sure at first what specific downside the questioner was talking about. There are obviously a number of pitfalls that scientists may encounter when engaging directly with the public. Previous posts have addressed some of these (here and here, for example).

One issue that I’d like to explore in this post is the phenomenon of online commenters who distort the viewpoint of readers/viewers about a science topic. This “commenter effect” is of concern to the scientist videographer who regularly posts science videos online. One decision that must be made during posting is whether to allow user engagement (i.e., allowing viewers to vote (likes/dislikes) and/or comment on the video).

We’ve all seen online science articles and videos that are followed by a comments section filled with rants, digressions, personal attacks, and inaccurate statements by people with absolutely no expertise in science, not to mention the specific subject under discussion. These negative comments often hijack the discussion and obscure any legitimate exchange of information and opinions. More recently, however, studies (see below) have suggested a more troubling effect, which is that commenters can sway the opinions of others about a science topic—even when the source of the original information is highly credible. In other words, people’s confidence about the science being presented by legitimate sources could be shaken by commenter opinions.

That’s pretty scary when someone with no scientific credentials (and possibly ulterior motives) can be more persuasive than a science professional with years of experience. This cartoon captures this conundrum perfectly.

The online magazine, Popular Science, stopped accepting comments on new articles on September 24, 2013. They had decided, “Comments can be bad for science. That’s why, here at PopularScience.com, we’re shutting them off.” Their explanation for this action goes on to say, “Even a fractious minority wields enough power to skew a reader’s perception of a story.” The explanatory post referred to a study of this phenomenon in which participants read a fictitious blog post on nanotechnology and then were presented with the comments section, containing either insulting comments or civil comments. The study found that the nasty comments “…not only polarized readers, but they often changed a participant’s interpretation of the news story itself.”

Two of the authors, in a New York Times article, stated, “In the beginning, the technology gods created the Internet and saw that it was good….Then someone invented “reader comments” and paradise was lost.”

Another study (see the preprint here)—perhaps of more relevance to the scientist videographer—examined how perceptions of a Public Service Announcement (PSA) were influenced by user comments. Groups of study participants were shown two fictitious PSAs, one advocating vaccinations (the CDC) and another warning against vaccinations (an anti-vaccination group). The results indicated that, in addition to the PSA message itself, the consumer’s opinion of the PSA was influenced by commenter’s reactions to the PSA. In another experiment, the commenters were identified as being a doctor, a lobbyist, or a student. This information about the identity of commenters had an effect on the consumer’s opinion and appeared to moderate the influence of commenters, e.g., when the expertise of a commenter was high (doctor), their comments had a greater influence on consumers than did other commenters (lobbyist, student), regardless of the PSA-advocated position.

The take-away from these two studies might be that allowing commenting by everyone, regardless of expertise or intent, is counter-productive to science communication. That seems to be the thinking behind some decisions to block all commenting on science articles and videos. However, I think this reaction needs more scrutiny. Science benefits from an open exchange of ideas and opinions. Completely blocking input from the public cuts off a potential source of information and questions that could stimulate further research. It also sends the wrong message (that science communication is a one-way street) and dampens potential public interest in a science topic.

I think there is a compromise that will allow commenting but may minimize the negative influence described above. I’ll explore this option in the next post.

In the end, my response to the seminar question was that if scientists don’t participate in the conversation, other voices will gladly fill the gap—voices that don’t necessarily represent the best interests of science or scientists. I think that is a far more dangerous situation than the one in which scientists engage the public and make their work accessible and understandable by the broader audience.